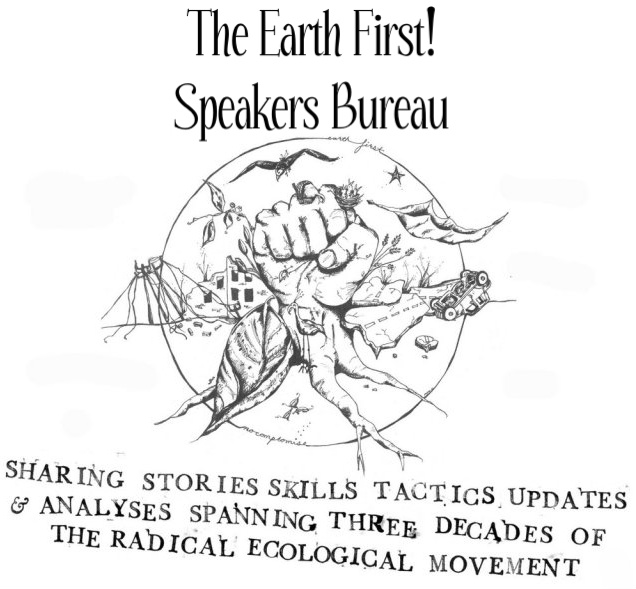 The (road)show must go on… A call out to students and community organizers!

In October 2010 the Earth First! movement and the Earth First! Journal celebrated their 30th anniversary. In the last three decades Earth First! collectives have carried out thousands of direct action campaigns, installing front-line occupations in old growth tree top canopies, blockading devastating power plants in the swamps of Florida, organizing with communities in Appalachia to end mountain top removal, and working side by side with other direct action movements to confront corporate industrialism in large scale street protests from Seattle to Copenhagen.

At over 30 years old, the Earth First! Journal remains one of the longest running radical grassroots environmental publications in North America. Independently run by members of the movement, the Journal has avoided the corporate collusion exhibited by other mainstream “green” publications. Because we do not compromise on content, the Journal continues to set the tone for resistance to ecological destruction from within the financial belly of the industrial nightmare.

To celebrate our 30th anniversary the Earth First! Speakers Bureau, which organizes grassroots environmental activist speakers and direct action trainers around the US, has been organizing speaking gigs across the US and abroad. We are looking to reach out activist on college campuses, as we feel an alliance between EF! groups and student groups is central to creating and spreading resistance to the destructive machine of empire and ecocide.

Can you arrange a speaking or training event featuring Earth First! activists? Topics and workshops available through the Speakers Bureau include:

Please get in touch with us.